What is Hungry Wolf?

***** “A Massive highlight of the Brighton Fringe” – What’s on Stage

***** “The cream of young Sussex actors – quite simply, the very best” – The Sussex Newspaper

Hungry Wolf made its debut at the Edinburgh Festival Fringe in 2013 with ‘GROWING PAINS’ which received 5 star reviews in WHAT’S ON STAGE and the BRITISH THEATRE GUIDE.  The company quickly attracted interest from the national press following a successful school’s tour and an appearance on ITV.

The company was conceived by the creative team behind the well-established The Theatre Workshop in response to the huge demand from their teenage and young-adult students to provide a platform for passionate youth theatre that doesn’t pander to stereotypical ‘youth theatre’ standards.  By working exclusively with new writers and tackling only the hardest-hitting and realistic subjects experienced by young people today, Hungry Wolf is unique.  Central to the company’s ethos is the creation of challenging, thought provoking and often political youth theatre that is relevant, modern and not patronising to either the young people performing or the audience. We work hard to secure the most exciting young actors and writers in the 14-21yrs age bracket across the South East.

We capture the attention of ‘Generation Y’, attracting a younger demographic to theatre audiences, whilst providing the stage alternative to some of young people’s favourite TV shows.  Naturalism and grittiness feature heavily in our productions along with strong comedic themes, after all, even through the most dark and twisted of tales there is light and there is always hope.

Hungry Wolf gives talented young actors the opportunity to work with up and coming writers and directors on imaginative, cutting edge theatre resulting in professional performance opportunities at the UK’s leading Arts Festivals.  We perform at The Edinburgh Festival, Brighton Fringe Festival and in 2016 performed for the first time at the Camden Fringe Festival in London.  In 2013 we undertook a school’s tour and are always seeking new and interesting outlets to present our work.

As a not-for-profit company, Hungry Wolf strives to keep audition and rehearsal fees as low as possible whilst ensuring that we provide excellent casting and rehearsal facilities for our young actors.  If you are interested in auditioning for our company, please click here 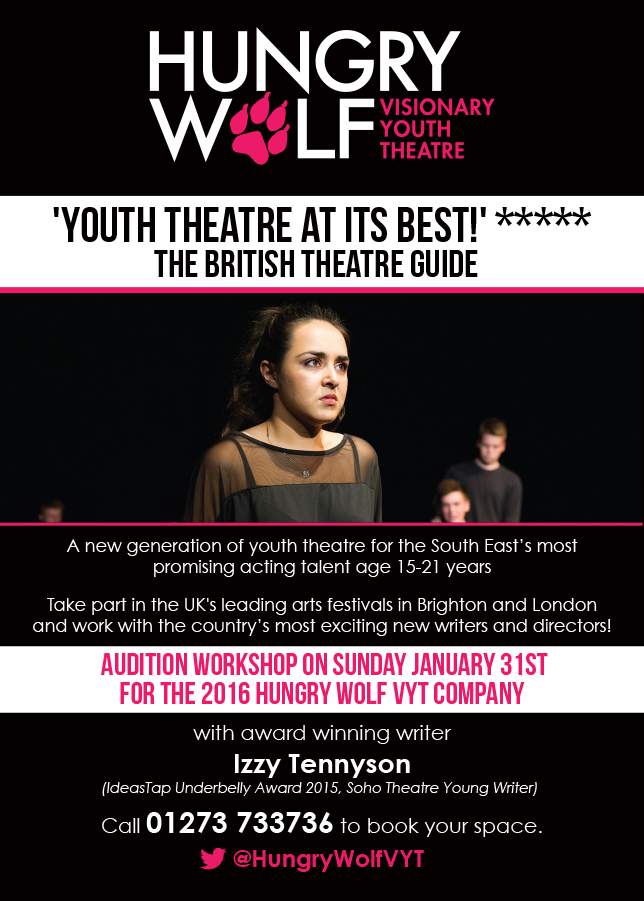